Visit Voices of Jordan page at Hurst Co to read the description of the book.

You can now Pre-Order Voices of Jordan on Amazon which will be available in October 2018. 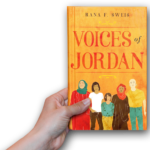 "Ordinary citizens are largely absent from the debate in shaping the current and future of the Middle East. By entering the minds, lives and living rooms of ten ordinary people living in Jordan, including a Bedouin, a female parliamentarian, a cartoonist, a Jihadi, and a Syrian refugee, the book gives an insight into everyday lives of these people – their struggles, their dreams and their perspectives on the deeper problems of the region. “Voices of Jordan” will be published later in 2018, illustrated with photos by renowned photographer Salah Malkawi. Ahead of the launch, we spoke to author Rana F. Sweis about the impact of EED support, and more broadly, the change she hopes the book may bring about in the longer term.